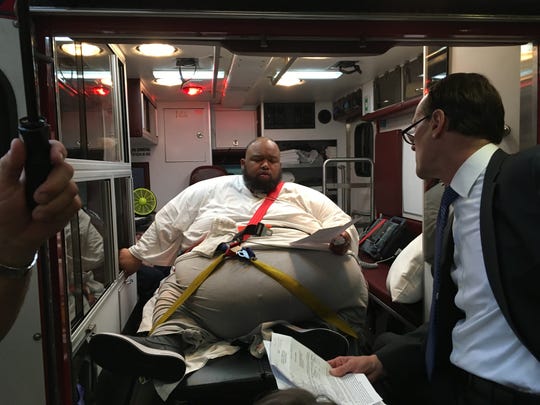 
A 600 to 700lb Cincinnati drug dealer was sentenced to 2 years in prison Wednesday morning from the back of an ambulance.

According to reports Kirk Smith,42 was taken to Hamilton County Courthouse in the back of an emergency vehicle for medical concerns Wednesday and court came to him.
Apparently the judge felt it would be safer if Smith was in an emergency truck during court so emergency crews pulled around to the back of the courthouse and proceeded with the hearing.

Smith was charged back in 2018 when police raided his home and found drugs, money, guns and surveillance cameras inside.
He could not be formerly placed under arrest at his home but was read his rights.

While in the back of the ambulance truck connected to a blood oxygen machine Smith admitted to cocaine trafficking and being a felon in possession of a firearm.
Smith was transported directly from the courthouse to the prison.