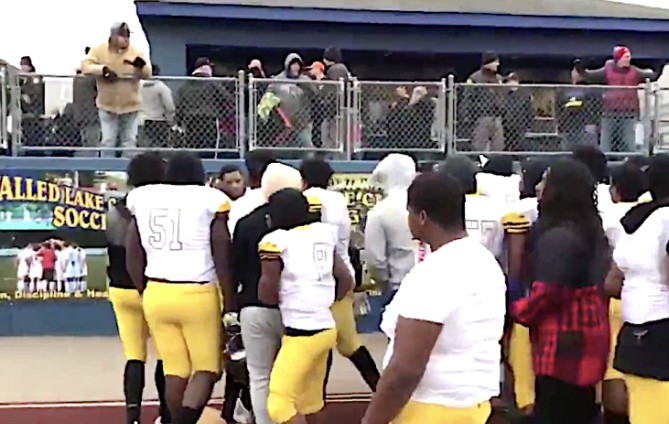 Saturday in Detroit Michigan, black football players from Denby High School, were spit on, attacked with garbage and traumatized with racial slurs throughout the game.
The Detroit Free Press reports this all began after players took a knee during the national anthem.
Denby coach Deon Godfrey realized some parents from the opposing Almont High School did not appreciate players taking a knee. “ our camera man is white and was filming near some Almont fans.
During the national anthem, he overheard them saying: “ look at those N-Words taking a knee and they don’t even know why they’re doing that and they kept going” Coach Godfrey explained.
He also added that Denby coaches were called “wiggers” and “ grown men and women started spitting on our kids as they walked up the ramp. They were throwing food, cups, and whatever”. “ they called my student trainer a little monkey and they were saying: Who let them off their leashes? They need to be on a leash.
They should have never been here in the first place” Godfrey continued. One parent is accused of assaulting a Denby player. “ One of our young man was punched in the face by an Almont parent!” Denby counselor Bob Burg wrote on Facebook.
In a letter to parents and students, Almont Community schools superintendent William Kalmar said that his district plans to investigate the incident “fully”.