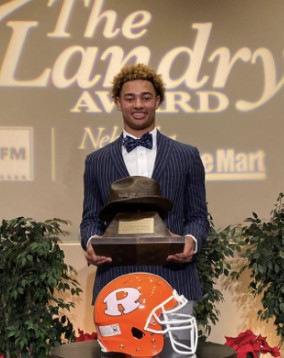 
Rockwall High School’s wide receiver Jaxon Smith-Njigba received the Landry Award for 2019 at the Hope Center in Plano Monday night.
The award was originally created back in 2010 by CBS 11 and Texas 21 in partnership with the Greater Dallas Fort Worth Fellowship of Christian Athletes and is presented by Nebraska Furniture Mart.
The Landry Award recognizes the top high school football players in North Texas that demonstrate positive character and superior leadership skills.
The other finalist were Marvin Mims from Frisco HS, Chandler Morris from Highland Park HS, Drew Sanders from Denton HS and Chris Thompson from Duncanville HS.
The 2019 ceremony will be on CBS 11 on December 27.