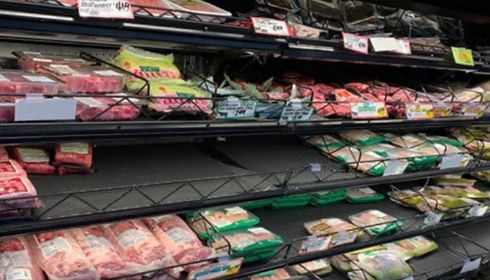 Consumers have noticed within the past few weeks that normal priced food items such as eggs, meat, and cereal have increased above the average

Eggs alone have increased sixteen percent, the largest increase thus far.As we all know, people are buying more groceries for home and eating at home more often, and because of this David Ortega, a food economist and Associate Professor at Michigan State University states that he believes it is not an issue of grocery markets to take advantage of the current issue but rather there is a problem with the current market conditions.

David Ortega stated to CNN that “For the most part, it’s supply and demand issues here, at play. What we’re seeing here is economic forces at play but also the resiliency of our food system to be able to provide food at a reasonable price.”

Another statement made to CNN that backed up his statement was from one of the largest grocery store chains from the southwest, Publix. They had stated that “In some instances, there have been price increases from manufacturers. We work extremely hard to negotiate pricing with our suppliers so that we can offer the best price to our customers. To mitigate price increases during difficult times such as these, we also try to absurd as much of the increase as we can before having to pass along an increase to our customers.”

Ortega also states while the sudden spread of the Coronavirus has been a massive shock to the food supply chain, the economics are working as they were created for.

“We are seeing the supply chains and markets adjust and it can be concerning for some, of course, but it is a short term reaction to a very significant shock.

Although we see that these markets are functioning properly, the main concern is the price gauging that consumers have witnessed over the past couple of weeks. Attorney General 11 midwestern states asked the US Department to investigate the price-fixing within the meatpacking companies during the pandemic.

The Attorney General had sued the United States’ largest egg-producing company, Cal-Maine Foods for raising the price of their eggs three hundred percent in one year, back in April.

Caal-Mine strongly denies these allegations and has claimed that they “have not exploited this tragic national pandemic for gain.”

The Attorney General stated that “No one is exempt from the price gouging laws in Texas, including suppliers of grocery stores and pharmacies, My office will not tolerate any person or business taking advantage of hardworking Texans. Those who violate the Texas Deceptive Trade Practices Act will be met with the full force of the law.”