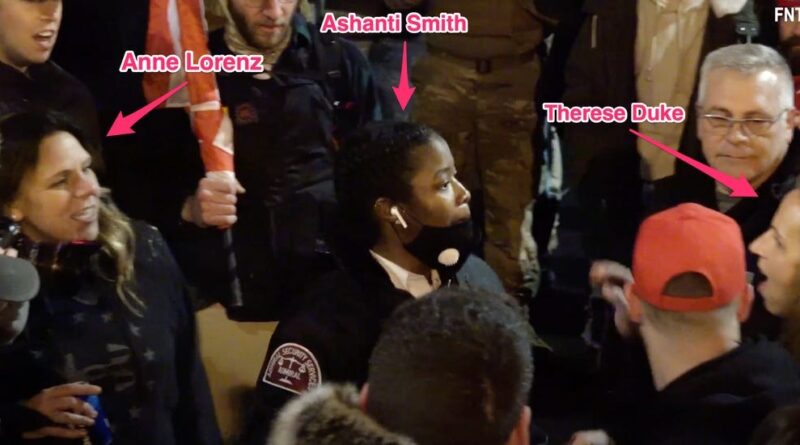 
According to recent reports, An African American Capitol Police Officer, was fired after videos surfaced of her punching a white woman in the face in self-defense during the US Capitol Riots. The police officer, who is named “Ashanti Smith”, was harassed and being assaulted.
In the video posted, which has people hailing her a hero, you see the now fired officer talking to one of the rioters, where from the side, the hand of the alleged white woman, who has now been identified as “Therese Duke”, reaches to touch Smith’s face.
After Smith punched Therese, things began to surge from there as she was grabbed by other rioters, as fellow police officers tried to escort her while other Trump Supporters are captured in the video attempting to get some punches of their own. The alleged assaulter Theresa Duke was seen with a bloody face as other rioters were asking who she had been hit by. Therese responded, “that girl punched me in the face, that Black girl, referring to former officer Ashanti Smith.
After the video was posted on social media on January 6th. The former police officer has taken to Social Media to share her side of the story, before confirming in result of the incident, she had been fired.
Ashanti stated, “Yes, that is me in the video. They constantly harassed me and all 3 jumped me. Me hitting her was a reflex. I asked them constantly to stop touching me, following me, and bothering me, the kept surrounding me trying to steal my keys out my pocket and trying to take my phone as seen in the video. Yes, I lost my job, Yes, I am good, I’ll respond to everyone once I get my phones out of property.”
After the interview with Ashanti was made public of her being fired, a GoFundMe pager was created in support of her, which has raised upwards of $100,000 to date. On the profile, the former officer gives further details on what happened that night, revealing the incident took place at Black Lives Matter Plaza in D.C and began after she found herself surrounded by the “Trump Extremists” causing her to “honestly fear for her life” due to the group not wearing masks and assaulting her.
More on this story as developments arise.
Miya Cooper.