While viewing a Disney film in bed, a young boy’s cheek was ripped off by his pet dog, leaving the toddler unable to smile.

“We ran in there, and we had to take Marley off of him. She wouldn’t stop. It was really vicious,” stated Brantley’s mom, Amanda Dally, of Missouri.

The mother said that the dog was on top of Brantley and that her and her husband, Chris, couldn’t see their son. “Christopher pulled her off, and Brantley was laying there holding his face together. She had sliced his face. It was a crazy night.” 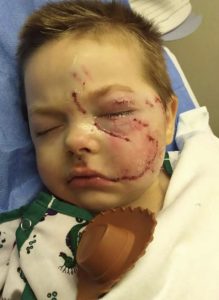 As a result, Brantley’s face was left dangling after the three-year-old dog pounced on him. His mouth is now paralyzed on one side because of ligaments that were torn.

“It was completely ripped, so you could see his teeth through his cheek. There was blood everywhere, all over Marley and the bed,” Dally said. She also said that she isn’t sure how the attack occurred but said that Marley is “the sweetest” and is protective.

The mother thinks that as the dog was eating steak, Brantley went to pet her, and the dog may have thought the boy was taking her food.

Brantley’s injuries were stitched up after he underwent a three-hour operation. His mother doesn’t know if he will be scarred forever or how many operations will be necessary.

“He needs more surgery because he can’t smile. His mouth was completely in half, so they had to reconnect the corners of his mouth,” Dally said.

Brantley has maintained that the dog didn’t mean to harm him, but the family had to put the dog down.

After medical treatment has cost the family $16,000, they have set up a GoFundMe page to help with their expenses.