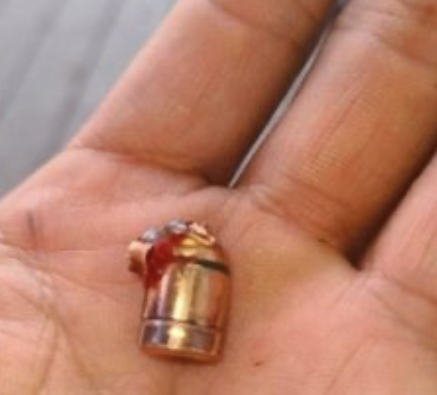 Bow Weasel, a resident of Elmo, Montana, says he bought his 6-year-old son a bag of hot Cheetos from his local corner store on Easter. As his son was just about finished with the Cheetos, he found a bullet at the bottom of his chip bag.
The bullet that was found appeared to have the Hot Cheetos red flavoring around it. Weasel fired back at the non-believers saying that the bullet did not just magically fall into the bag out the sky…and didn’t want to get started with the people who assumed he made the whole story up.
Weasel says he contact Frito-Lay though Facebook also following up with an incredibly detailed email of his findings. Weasel says it did not take long for a company representative to reach out to him letting him know that they were researching the situation and taking this matter very serious.
Weasel says Frito-Lay is sending him a kit to be able to send the bullet back for testing. He also added that he is not looking for any compensation from the ordeal, only wanting the company to research this situation in hopes that it will not happen again.
Another big-name brand, Cinnamon Toast Crunch was recently under fire for shrimp tails being found in a consumer’s cereal box.
More on this developing story.