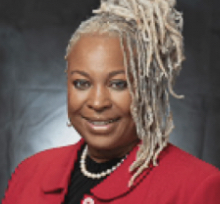 Angela Richardson Woods was appointed as a new member of the District 1 city council following November’s recall vote of La’Shadion Shemwell.
The council announced Monday that Woods would be representing the District until May of 2021. She is the first black woman to sit on the McKinney City Council.
Richardson-Woods is replacing Pastor Christopher Thornton who was appointed to the District 1 seat in early December.
It was determined last week that Thornton resided outside of McKinney’s district boundaries which made his ineligible.