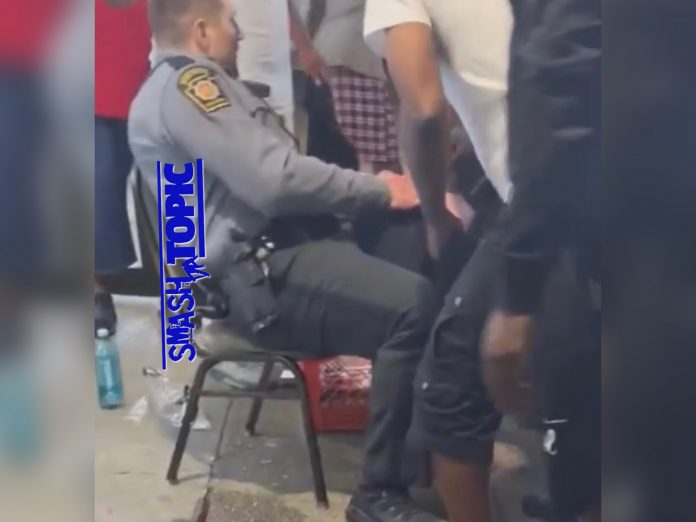 John Schooley, a Pennsylvania State Trooper, was on a routine patrol with his partner when they noticed a disturbance at a nearby mini mart.

Damian Bradford was threatening people with a pistol before the state troopers became involved. Schooley and his partner Shawn Palmer quickly started to try to restrain him. Investigators wrote that Bradford violently struggled with the troopers as they were trying to restrain him, and he shot Schooley.

Bystanders quickly tried to get Schooley out of the store and attend to his wound. While, others helped to restrain the suspect.

When bystanders disarmed Bradford he tried to take trooper Palmer’s gun and taser.

Matthew Weekley was close by the mini-mart when he heard a gunshot.

“Not too long after I heard the shot, they brought the trooper out, and he was just bleeding, and we attended to him,” Weekley said.

Weekley didn’t hesitate to help the trooper that was bleeding out from his leg.

“They said, ‘man, he needed a shirt,’ so I took a shirt and made tourniquets for him. People were just wrapping stuff around his leg, and he was directing us, he was like, ‘man, wrap it around my leg, I need it tighter’, so we just tightened it. The ambulance didn’t come for a while,” Weekley said.

It’s a video going around showing a group of men using their own shirts to help the trooper in need.

“He a human, man. Like I aint really tripping, man, I’ve dealt with cops all my life. I’ve been on the wrong side. I’m on the good side now, so it really wasn’t nothing,” he said. “He’s got some babies waiting at home as well as me.”

“I want to thank the citizens, several who came to the aid of our troopers. The sense of community and support of our police departments must overcome the sense of fear that the gun violence produces” says Major Jeremy Richard, deputy commissioner of operations for Pennsylvania state police.

State Trooper Schooley underwent at least one surgery and Palmer was taken to a hospital to be evaluated for minor injuries.