A South African woman is being called out after she walked into a car dealership and posed in front of a display car to solicit her business.

A lady who goes by the name of @Khali_billions on social media is a forex trader that was trying to lure people to her business.

The manager took to social media saying the woman walked into their dealership with a Louis Vuitton bag, a bouquet of flowers, and a bottle of Champagne. 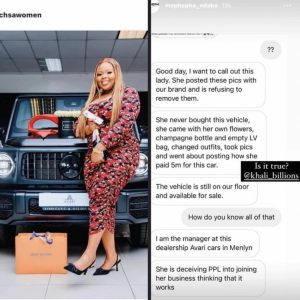 She went into the restroom changed into a dress and heels before having an employee hand her the keys to a Mercedes G wagon that she claimed she paid cash for.

She took several photos and then posted them to social media bragging about how much money she has made with her business and how others should join.

After posting several photos to social media someone shared her post calling her out and saying what a fraud she was.

The manager also commented by saying he was sure she didn’t purchase the vehicle because it’s still on their showroom floor.

They also said they asked the woman to delete the misleading pictures from her social media but she refused.