A Grand Jury in Mississippi has decided not to indict the white woman who stated that Emmett Till, 14, whistled at her. It resulted in his lynching almost 70 years ago.

In June, an unserved arrest warrant, charging Carolyn Bryant Donham with the kidnapping of Till, was found in the basement of the Leflore County Courthouse.

Donham, who was 21 back then, is now 87. She wasn’t arrested or charged in his 1955 lynching. However, her ex-husband, Roy Bryant, and brother-in-law, J.W. Milam, were both acquitted of murder. 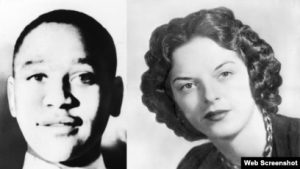 The Grand Jury combed through evidence and witnesses’ statements prior to refusing to indict Donham for abduction and manslaughter, said the DA in that county.

Till, who resided in Chicago, had been visiting family members in the Deep South when there were allegations that he whistled at Donham. She had been working in her relatives’ grocery store in Money, Mississippi.

Bryant and Milam abducted Till at gunpoint, beat and shot him, and threw him into the Tallahatchie River. His cut up body was found days following that. It had been held down in the water by a heavy cotton-gin fan.

Although the pair was acquitted in 1955, they later confessed to the killing in an article in Look Magazine. In 1980, Milam died, and in 1994, Bryant died.