Mike Itkis, a Manhattan election’s candidate, has come up with a raunchy method of getting his name out there as voting season has come around.

Itkis is running in New York’s 12th district against Rep. Jerry Nadler, a Democrat who won the June primary. Itkis, an independent, is managing a platform that includes sex positivity as one of his main issues. He is also a proponent of making sex work legal. 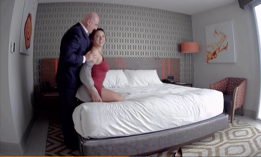 To show that he truly believes in what he is promoting, Itkis recorded and released a sex tape he made with an adult film star.

Itkis, a cybersecurity specialist and Major in the U.S. Army Reserves, said that his video, that was uploaded to a pornographic website, is a “conversation piece.”

“If I would just talk about it, it wouldn’t demonstrate my commitment to the issue. And the fact that I actually did it was a huge learning experience. It actually influenced items on my platform,” he said.

On his campaign website, Itkis calls himself a “liberal independent candidate” who isn’t “married. No kids. Not celibate. Atheist.”

Itkis has also said that he is a “pro-choice candidate that would like to redefine the abortion debate as a right to unplanned sex.”

Another one of Itkis’s beliefs is that “Men should not be required to support biological children without prior agreement.”