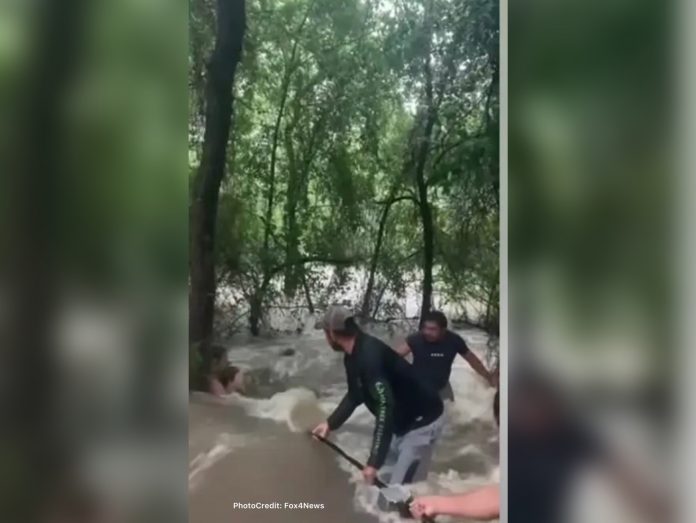 A bus driver for Dallas ISD and a monitor assisted in saving two kids. The children had been trapped and almost swept away by flooding waters.

They reported that they usually don’t drive the direction they were going. Thus, it must have been divine intervention.

A recording of the rescue was taken by the bus monitor, Tekendria Valentine. They tied seat belts together to save the children who had been holding onto trees. This was as flooding occurred in southeast Dallas County.

Neighbors also jumped in to assist in pulling the boy and girl to safety.

“It had to be God to send me that way because I don’t normally go that way,” stated Simone Edmond. She has been a DISD bus driver for 22 years.

“I’m just happy we got them out. It was super crazy though,” Valentine, who has been with the district for two years, said.

The pair had just begun to work together two weeks ago.

No one had been on their bus when they were dispatched to pick up a student who had missed the bus. That student normally isn’t on their route, so they had gone a different way. The student never showed up.

Then, they observed two siblings, a boy and a girl, who were trapped in floodwaters, close to Belt Line and the CF Hawn Freeway. Their father was attempting to assist them.

The mom asked them to call 911, as the boy was yelling for help. Since their bus is for special education students, Edmond and Valentine were able to remove the seat belts and tie the straps together. As neighbors assisted, they all brought the children to safety.

Edmond and Valentine said they don’t know how to swim but took a chance. They added that the little boy thanked them over and over and begged to give them a hug.

“To be honest, I got a little emotional about it because it was really inspiring. I mean, it just shows the commitment our bus drivers and monitors have in the district,” said Dr. Angel Valles, with DISD.

“Like I said, it had to be God to send us that way and to make us think because we knew they needed help,” Edmond added.

Plano Man Sentenced To Life In Prison For Murder