The Dallas Police Department are asking for the public’s assistance in locating a suspect in a fatal hit and run crash.

The incident occurred Sunday morning on the 12900 block of Kleberg Road at Handlin Street. Officers were called to the scene where a bicyclist had been struck by a suv.

Upon arrival officers found the unidentified victim in a grassy area next to the roadway. The victim was pronounced dead at the scene.

On a video of the hit and run it shows the suspect hit their brake lights, get out of the suv and then get back in and drive away from the scene without checking on the victim. 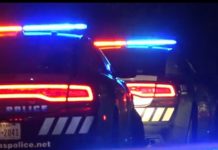 Shooting In South Dallas Leaves Man Dead On A Sidewalk