Law enforcement officers, in Florida, apprehended 12 men for soliciting children for sex online. One of those men was a Walt Disney World employee.

There are 49 felony charges against the suspects who are ages 20 to 67. They were identified after a two-week undercover probe called, “Operation Child Protector II.”

One of the men who was taken into custody was Zachary Hudson, 30, a bus operator at Disney World. 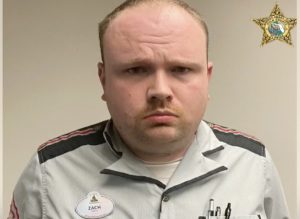 Hudson is accused of sending and receiving online messages with an undercover officer who was pretending to be a 15-year-old girl. This happened on June 4 and 5.

When the detective questioned whether it bothered Hudson that she was just 15, he stated, “as long as my being older doesn’t bother you.” He added that “age is just a number.”

Authorities say that Hudson also sent text messages to the girl. These included what sexual acts he wanted to perform and “being honored to take her virginity.” He sent naked pictures, as well.

Hudson reiterated that the girl must keep quiet about their relationship. This is although he said he would “risk going to jail to spend time with her.”

After a warrant was granted, Hudson was taken into custody, in Orlando, and held in the Orange County Jail. A mugshot revealed he was still in his Disney World uniform when he was arrested.

Hudson has been charged with one count of use of a two-way communication device to commit a felony. He is also facing charges of transmitting material harmful to a minor.