The mothers of two teens arrested during an officer-involved shooting incident say things aren’t adding up and they want answers.

15-year-old Jaheim McMillan was shot in the head by a Gulfport Police Officer last Thursday around 2:30 p.m.

McMillan and four other teenagers were inside a vehicle that was parked at a Family Dollar in Mississippi. According to police, reports came in of several individuals waving guns at motorists.

When officers made contact with the vehicle, they say McMillan had a gun on him and did not drop it after being commanded to. One officer fired his service weapon, shooting the teenager in the head.

He was transported to the hospital where he succumbed to his injuries and was pronounced deceased on Saturday.

The other occupants of the vehicle were arrested and taken to the Harrison County Detention Center.

After speaking with their sons, who are currently in jail, Mary Spivery and Katrina Campbell say the teenagers never had any weapons on them. 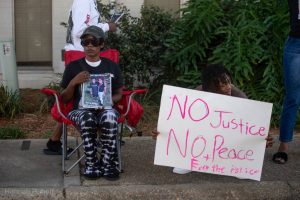 They are both demanding to see the footage from the incident and any other evidence the police say they have.