Firefighter Kay’Ana Adams has been terminated over a tattoo on the back of her head.

Adams had worked at the Maryvale station of the Mobile Fire Department in Alabama for nine months.

She stated that she believed that she had been following the fire department’s policy. It banned “tattoos on the face and neck.” 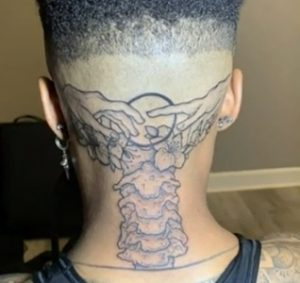 “…somebody put in a complaint in regards to my tattoo. The next thing I knew, I was being investigated for it…Then, they made the decision that I was in violation of policy,” Adams stated.

The city agreed that Adams could grow her hair out to hide the head tattoo. Then, another complaint was brought forth. This was for her hair being grown out, violating the city’s guidelines.

Then, three months later, the department made it a policy that tattoos above the neckline are prohibited, as well.

On November 10, Adams was terminated although a captain at the station took a photo of the back of her head, and the tattoo wasn’t visible.

The city confirmed that Adams was fired during her work test period. Adams says that the period lasts six months, but hers was extended another six months.

It was reported that there is another firefighter who has a neck tattoo, but he was permitted to cover it up until a mandate was put into place. He wasn’t terminated.

Adams thinks that she was really terminated because she was vocal about her experiences and what she saw as a trainee and new firefighter. This included harassment, antagonization, and sexist comments by two male firefighters.

Adams filed a grievance in regards to the tattoo complaint against her. She was fired days prior to her expected response back about another grievance she filed about the complaint about her hair.

Adams has now filed a complaint in regards to the department with the Equal Employment Opportunity Commission.

US Tracking Suspected Chinese Spy Balloon Over Western US