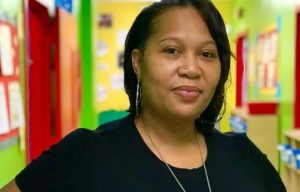 Court documents note that Weems confronted her husband, James Weems, 57, after three children at her day care stated that he had molested them.

Shanteari Weems had gotten several messages from parents and teachers, while out of town, about the allegations at Lil’ Kidz Kastle Daycare Center.

She then approached her husband about the accusations inside their hotel room at the Mandarin Oriental Hotel.

The discussion escalated, and the wife stated that James got up and came towards her.

Authorities say that Weems then retrieved a gun from her purse and shot James.

Authorities took two firearms from the scene and a paper that detailed plans to shoot her husband.

Shanteari had already contacted authorities prior to the confrontation with him. She told police she just wanted to injure her husband, not kill him.

An arrest warrant was issued for James, in Maryland, on July 26. This is in connection to the child sexual assault claims. He is facing 13 counts in relation to three victims. This includes two counts of third-degree sexual assault and three counts of second-degree assault.

James remains hospitalized in Washington DC from wounds he suffered in the shooting. However, he is in police custody until he is extradited.

Reports indicate that James Weems is an ex-Baltimore City Police Officer. He was last linked to the department in 2008.