A Louisiana man was arrested after he allegedly waved down a police officer and slapped him.
According to reports, on October 24, Troy Davis was walking on the 1800 block of Grammont St. 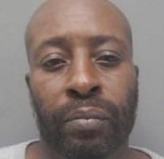 He flagged down a Monroe police officer and approached the drivers side window.
In a report the officer said the man said What’s up, man?” Then he slapped him in his face and said “F— the police” as he tried to walk away.
Davis was quickly arrested and taken into custody.
He was charged with felony battery of a police officer.