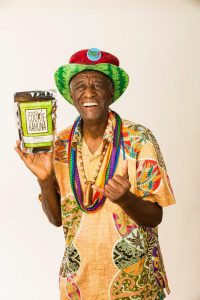 Amos was born on July 1, 1936, in Tallahassee, Florida as Wallace Amos Jr. His parents separated in 1948 and he was sent to live with his Aunt Della, in New York City.

However, Amos eventually enrolled at the Food Trades Vocational High School, where he studied culinary arts for two years. 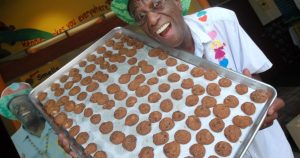 Secondly, he joined the U.S. Air Force for four years and returned to New York in 1957. He spent years working in the stock room at Saks Fifth Avenue, and in the mailroom at William Morris Agency.

In 1962, Amos became the first Black talent agent in the history of the William Morris Agency. Determined to make his mark in the industry he discovered the singing duo Simon & Garfunkel.

A few years later, Amos lead the agency’s newly formed rock ‘n’ roll department. As a result, he was able to work with artist like Diana Ross, Marvin Gaye and Sam Cooke.

In 1967, Amos left William Morris and moved to Los Angeles. There he tried to set up his own personal management company. After several failed attempts and bills piling up, he began to take comfort in baking chocolate chip cookies.

Amos modified a version of his Aunt Della’s cookie recipe and decide to open a cookie stand.

Because he had financial support from Marvin Gaye and an innovative marketing plan, the first Famous Amos cookie store opened on Sunset Boulevard in Los Angeles in 1975.

However, in 1985, mismanagement caused Amos to slowly sell off pieces of his company. In 1988, a corporation called the Shansby Group bought Famous Amos Cookies and successfully re established the brand image, changing it to a lower priced product.

In 1991, Amos attempted to launch another cookie company, which he called Wally Amos Presents Chip & Cookie. Unfortunately, the Shansby Group sued Amos for violating an agreement.

In 1998, the Keebler Company purchased the Famous Amos brand, and Amos resumed his role as the brand’s spokesperson.

In the 1990s, Amos worked with partners to launch a muffin company now known as Uncle Wally’s Family of Muffins. The company now produces various homemade and healthy style muffins.