After building a big social media following with her own Only-Fans-style site, MMA star Valerie Loureda is the WWE’s newest signing.

The 23-year-old, from Miami, has a 4-1 record in the cage that she has now retired from.

“Yes, my mind has completely shifted from MMA to WWE. All that passion and energy I have for MMA that I worked for five years, I’m now doing that in a training facility in Orlando. I love fighting, but this is my time,” Loureda said. 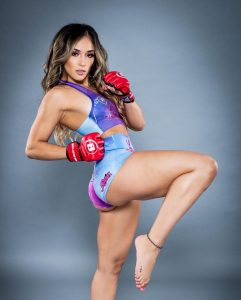 In 2019, at the age of 19, Loureda turned pro as she was an international Taekwondo champion and black belt.

She had four bouts with American promotion Bellator who has kept the door open for her for more opportunities in the future.

“Valerie Loureda is a very young and talented athlete who can accomplish plenty in MMA for years to come. But, for now, we wish her the best of luck as she pursues her dream of becoming a WWE superstar,” said the president of Bellator.

When she isn’t in the cage, Loureda is known for posting explicit pictures on social media. Loveloureda, is the name of her Only-Fans-style website, and the subscription costs $9.99 per month. Loureda says that she is an actress and a model which will assist with her new career with the WWE.