Three children were found dead at the shoreline of Coney Island early Monday morning. Shortly after discovering the children, law enforcement learned that the mother confessed to killing them.

Erin Merdy, a 30-year-old mother of three from Brooklyn, NY, allegedly confessed to one of her family members that she’d killed her kids.

Paramedics performed life-saving measures and transported them to a local hospital, however, all three were pronounced deceased at 5:38 a.m.

The location where 3-month-old Oliver, 4-year-old Liliana, and 7-year-old Zachary were found unresponsive is just 3 blocks from their mother’s apartment.

At the time of the incident, a little further down the beach, Merdy was found walking barefoot in her robe, soaking wet.

Three hours prior to the discovery, family members contacted police with concerns for the children’s well-being. They also told officers that they believed Merdy did something to the kids and that she has a history of mental health issues and was possibly under the influence. 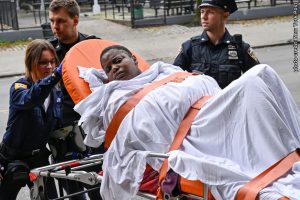 Police escorted Merdy into an ambulance and she was transported from the scene to a local hospital.

No charges have been filed at this time.

A medical examiner will perform autopsies on each of the children and determine the cause of death.