A woman was ambushed and fatally shot after she was led to an apartment complex south of Atlanta, Georgia. She was lured by her former boyfriend in order for her to fight his new girlfriend.

On May 25, De’ja McCrary came to the Camelot Condominiums, with her 4-year-old child, as her ex-boyfriend had asked. The child suffered minor wounds during the said occurrence.

McCrary’s former boyfriend, Colvin Lindsey, is said to have set up the fight with his new girlfriend, Teandra Brox. However, McCrary was shot and killed when she stepped out of the car.

On May 30, Lindsey was taken into custody at the Fulton County Jail. He has been charged with murder, aggravated assault with a deadly weapon, and possession of a firearm in the commission of a felony. He also faces a charge of being associated with a street gang while participating in a crime. 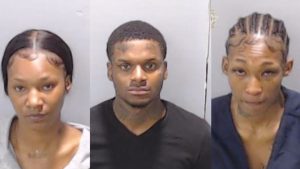 On June 1, Brox was taken into custody and faces murder and aggravated assault with a deadly weapon charges.

Police say that Aquala Barnes, another suspect, exchanged text messages with McCrary about the place that she should come to. She, also, has been charged with murder and aggravated assault with a deadly weapon.

Authorities haven’t confirmed who pulled the trigger, and an investigation is on-going.