An unclothed man was captured on camera as he climbed on top of a tractor-trailer. It occurred on a major section of a highway, in Sarasota, Florida.

The incident occurred on June 30, on Interstate 75. Officers were called to the location about a naked man who had been running in and out of traffic. 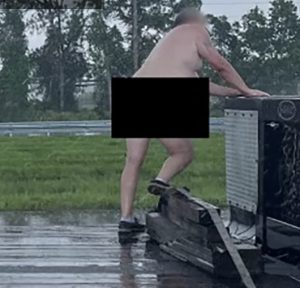 Images of the man show him with no clothes on, only socks and shoes, climbing onto the rear of the truck.

The unidentified man was pulled off the tractor-trailer and placed into protective custody, the sheriff’s office said.

Eventually, the man was taken to a medical facility to undergo a mental evaluation.

It isn’t known if he was charged.