A woman was discovered decapitated in a small residence in a wooded, rural location of Waller County, Texas, on Wednesday.

She has been named as Anggy Diaz, 21. Her husband, Jared James Dicus, has been charged with her killing. 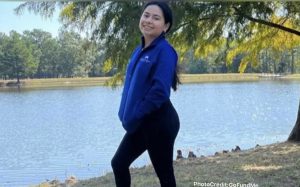 Deputies went to the residence on Oak Hollow, at around 4:30 p.m. in regards to a dead woman. They then discovered Diaz inside the couple’s small residence behind his parents’ home.

Authorities say that it seemed that a kitchen knife was used in the killing of Diaz. It was also noted that several calls to police had previously been made from the home.

Friends of Diaz’s said that she was from Nicaragua and was employed at two different places as she tried to pay for her mother’s cancer treatments back home.

Camera footage from the store where she worked depicted Dicus pulling into the parking lot on the day she was found dead. He went into the store, stole a beer, left out, and drove away as he took a sip.

When Diaz was found, her head seemed to be cut off, and her body was left in the home.

Dicus stayed at the scene until deputies arrived. He eventually admitted to the killing.

Diaz and Dicus had just wed in October 2022 after meeting at her place of employment. Her friends stated that they knew something was wrong after the wedding but never knew things would end like this.