Video footage of a Brooklyn pastor putting his hands on a woman during Sunday service has gone viral.

44-year-old Bishop Lamor Whitehead was delivering a sermon at the Leaders of Tomorrow International Ministries on Sunday morning.

Bishop Whitehead interrupts the Sunday service, which is being live-streamed to the church’s social media pages, and focuses attention on a female congregant.

Whitehead addresses the woman and says, “you wanna come preach? Come on up here.” He then announces multiple times to “move her out of here.”

The woman walks onto the altar and into the frame on the live-stream when Whitehead grabs her by the neck and shoves her off.

The video of the incident was quickly uploaded to YouTube and has since gone viral.

The alleged victim also took to social media after the altercation and posted a video of a large mark on her neck. 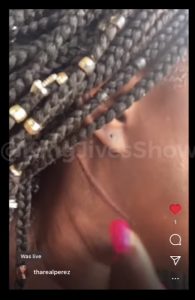 The NYPD has taken action in regards to the incident. Both, Bishop Whitehead and the woman were taken in for further investigation.

No arrests have been made at this time.