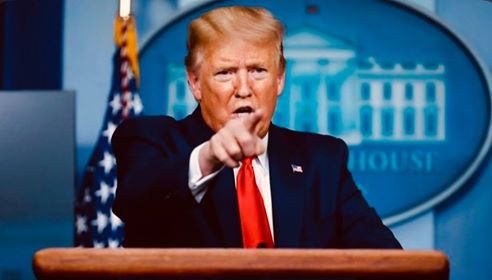 The White house offered no details explaining President Trump’s tweet about immigration
“In light of the attack from the Invisible Enemy, as well as the need to protect the jobs of our GREAT American Citizens, I will be signing an Executive Order to temporarily suspend immigration into the United States!”
As many have come to know as the “invisible enemy” in the past few weeks by President Trump tweets, that he will temporarily suspend any traveling from or to Mexico and Canada into the United States due to COVID-19, stated Monday night.
No celebrations were made about how this would affect current immigration programs in the United States, or the border operations that are in place. But the administration announced Monday morning that all participants, Mexico, Canada, and the U.S. all agreed to keep their border closed for thirty additional days in hopes of preventing the spread of the Coronavirus.
President insists that all credit is due to him for the restrictions for travel to the U.S. from China and vice versa, as well as any hard hit European Countries, stating that it would help slow the spread of the Coronavirus. But restrictions were made on these counties alone, we have yet to hear about any other countries being restricted.
But for the time being the State Department has issued that they will not be processing VISA, that also includes immigration visa, all actions have been suspended for the next few weeks.
As of today more than 42,000 Americans have died due to the COVID-19 and over 750,000 Americans have contracted the Coronavirus.