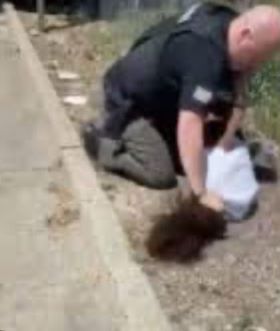 A California police officer is under investigation after a video went viral Monday on social media of him repeatedly punching a 14 year old boy in the chest and then slamming his head into the ground because he thought the teen had marijuana in his possession.
According to reports the deputy with the Rancho Cordova Police Department was patrolling the area due to complaints about hand-to-hand sales of alcohol, tobacco and drugs to minors, and had lost sight of the adult that was at the scene.
The deputy believes he had reasonable suspicion that criminal activity was occurring and approached Elijah Tufono,14 and attempted to detain the juvenile so he could conduct further investigation.
The officer claims that Tufono was uncooperative and had no identification and then became physically resistive causing the deputy to lose control of his handcuffs.
When other officers arrived to the scene and were able to search the teen they discovered a swisher sweet but not marijuana the teen was issued a ticket and released to his guardians.
Tufono’s older sister posted the video to twitter and it shows the boy identifying himself and screaming as the officer repeatedly punched him.
The Rancho Cordova PD and Sacramento County Sheriff’s Office are investigating the deputy’s use of force in the incident.