A senator in Rhode Island is being criticized for posting a campaign video that depicts her twerking upside down in a little bikini.

On the Fourth of July, Democrat Tiara Mack, 28, posted herself shaking her bottom on her official district TikTok page. She had been doing a headstand on a beach at the time. 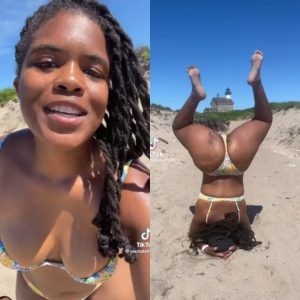 She promoted the clip as “a promised senator thirst trap at Block Island[ emoji].”

This was just one clip that she uploaded as she wore her yellow, skimpy bikini. Another clip shows her asking “how many nip slips” she was permitted. One of her friends tells her that she has already had three.

Mack, who says that she is a Black, queer woman, has gotten over 70,000 views of her twerk clip. One viewer wrote, “I need to see more politicians doing [this]. “Tempted to move to RI just to say this is my senator,” someone else wrote.

However, others feel that this method of getting votes is tacky.

“If this is what’s running for our country, we are in serious trouble,” someone wrote. “I don’t ever wanna hear you complain about how ‘women aren’t respected in this country’ after posting this,'” someone else commented.

Mack responded to the critiques. “The conversations about my body twerking upside down are directly correlated to the conversation that’s happening in the United States right now after the overturning of Roe v. Wade. The crux of the conversation about abortion is about body autonomy,” she said, also relating it to trans rights and inter-sex rights.

The state Republican party is now raising money off the video, attempting to assist her opponent, Adriana Bonilla, beat who they call “Twerking Tiara Mack.”