Food inspectors and germophobes often wonder what can’t be seen when visiting restaurants.

Believing that it was a 24-hour restaurant, Rita Guarnero-Longoria went to a Taco Cabana. This occurred at 12 a.m., in San Antonio.

Rita, who goes by @ritalongg on TikTok, stated that she went to the window of the drive-thru. She was hoping to catch an employee. Instead, she saw at least 4 rats scrambling around on the floor. 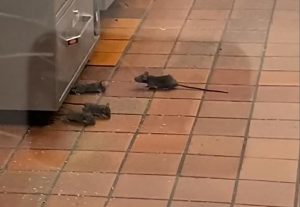 The TikTok video has many users joking about the ordeal. “I see Remy and the gang but where that boy Linguini,” one user wrote, referring to the Disney film, “Ratatouille.”

Some other users expressed their dismay. “Have you shared this on the San Antonio restaurant Facebook page?”

Through an email, Taco Cabana released a statement. “On Sunday, July 3, 2022, pest activity was identified at Taco Cabana’s restaurant. The location was 6040 Bandera in San Antonio, Texas. The health and safety of Taco Cabana’s guests and team members…remains to be the utmost priority. This was an isolated incident. TC investigated, then worked swiftly and efficiently to address and eliminate the pest situation….”

The statement added that inspectors found that the pests had just migrated to the location within the last 48 to 72 hours.