A 4-year-old girl experienced severe brain damage while visiting the dentist. Now, the Houston-area family has been awarded $95.5 million. However, the family may not ever receive the cash.

Former dentist Bethaniel Jefferson was found to be negligent, while treating Neveah Hall, after a three-day trial. Hall had suffered seizures brought on by drugs and oxygen deprivation at the Diamond Dental Practice in Houston in January 2016. 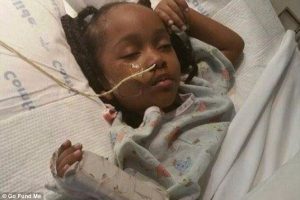 The family’s lawyer released a statement, saying that Nevaeh was restrained and sedated ineffectively while receiving treatment for a tooth that had decayed.

Courissa Clark and Derrick Hall, Nevaeh’s parents, added that Jefferson kept the girl, who is now 10, away from her mother after her seizures started.

Now, the child is conscious but needs 24-hour medical care and isn’t able to see, talk, walk, or eat by herself, her relatives stated in court.

“The problem is the dentist has long since paid the pittance that she could pay. Now, we are sitting here, and we’re screwed,” said the family’s lawyer.

The family still has to determine how to take care of their child who is now severely disabled.

“…this is a message to every crooked dentist in this country that if you abuse our vulnerable children…we will hold you accountable,” stated the attorney.

In November 2016, Jefferson’s medical license was revoked. A year following that, she was indicted by a Harris County grand jury for intentionally and knowingly by omissions causing serious bodily injury to a child by failing to seek and provide adequate medical attention.

Her trial is set to start in October.

This is another opportunity to get justice for a woman who still has big aspirations for her daughter.

“I definitely can see her walk and talk again,” Clark stated.