The migrants derived from Colombia, Cuba, Guyana, Nicaragua, Panama, and Venezuela. They were left at the location four days following VP Kamala Harris’ visit to Houston and her saying that the U.S.’s border with Mexico was ‘secure.’ 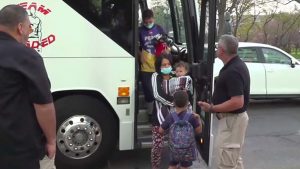 “Our supposed border Czar, Vice-President Kamala Harris, has yet to even visit the border to see firsthand the impact of the open border policies she has helped implement…,” Abbott said.

“Texas will continue sending migrants to sanctuary cities like Washington D.C., until Biden and Border Czar Harris step up and do their jobs to secure the border,” he added.

Reports indicate that the women, children, and men, who were left close to Harris’ residence, weren’t aware of what was going on. Thousands of the migrants, many of whom are looking for asylum, have also been sent from Arizona to D.C., since April.

Harris recently said that the border problem comes from the nation’s immigration system and not from the Biden Administration’s management of the issue.

“The border is secure, but we also have a broken immigration system. In particular, over the last four years before we came in, and it needs to be fixed,” Harris said.

“We have a secure border, in that that is a priority for any nation, including ours and our administration. But, there are still a lot of problems we are trying to fix,” she added.