A San Antonio man was sentenced to 25 years in prison for abusing a dog back in 2019.

Back in February of 2019, 56 year old Frank Javier Fonseca was caught on camera kicking and beating his Rottweiler in his front yard.

He was also seen choking and beating the dog with a piece of wood, allegedly for getting out of the yard. 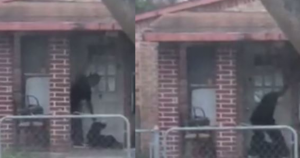 Fonseca’s sentencing is one of the longest sentencing given in the state of Texas, the City said. The fact that he had previous felonies also played a part in his sentencing.