The first woman in Georgia to be diagnosed with Monkeypox has shared her story as she battles the disease.

According to the Georgia Department of Public Health, the woman reported that she contracted it from a man who had the infectious disease.

The woman took to Instagram, posting pictures of the bumps on her face every few days to share her experience.

In a 3 to 12 day timeline of photos and videos, the bumps on her skin can be seen rapidly swelling as they continue to spread. She also noted that she experienced most of the symptoms associated with Monkeypox, however, most of them went away. 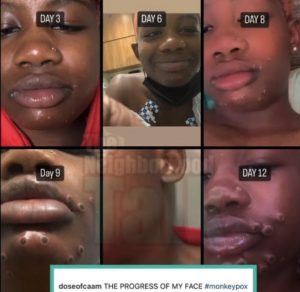 The woman says she’s still dealing with the welts on her skin that itch her constantly, all over.

According to the CDC, Georgia has the fifth highest number of monkeypox cases in the country.