After claims that Boston Celtics head coach Ime Udoka cheated on Nia Long, fans have garnered support for the actress on social media.

On Wednesday, it was announced that former NBA player and now coach, Udoka, is looking at disciplinary action. This is set to be a “significant suspension,” sources say. 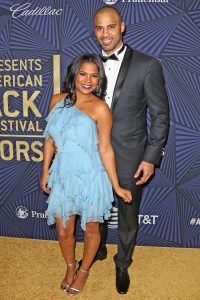 “No final decision has been made on the length of the suspension, but internal discussions have included scenarios that would keep Udoka out for the entirety of the 2022-2023 season.”

A senior NBA writer, Shams Charania, reported on Thursday morning, that Udoka had an inappropriate intimate and consensual relationship with a woman who was a part of the team staff. This violates the franchise’s code of conduct.

As claims against Udoka went viral on the internet, many fans expressed their disbelief that the ex-San Antonio player would be disloyal to the beloved actress.

“This man Moved Nia Long to Boston and cheated on her? Oooooommmggg! I’ve never hated the Celtics more in my — life,” wrote business advisor Zara Rahim.

“Cheating on Nia Long? End of days has to be upon us. Because ain’t no way,” fashion designer Nina Parker tweeted.