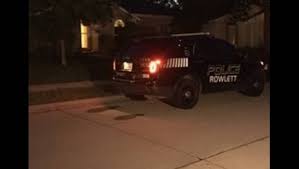 A man killed his son and himself Saturday night in Rowlett, Tx.
Police were called out to the 5900 block of Mimosa Ln in Rowlett around 11pm.
Apparently a man was having marital issues with his wife and she threatened to leave him. Well later that day she left the house after several hours of arguing with her husband.
The man allegedly called her later that evening and told her that he he shot ans killed his son and was about to kill himself. The woman called police and notified them about the phone call.
When authorities arrived to the home they found an 11 year old boy and 41 year old man laying there deceased with a handgun beside the father. The son was rushed to Baylor Scott & White Medical Center Lake Pointe where he later died.
The victims names have not yet been released and no one else was present in the home or injured. This investigation is still ongoing.