Authorities are searching for a man and woman possibly connected to a fatal shooting that happened in Dallas early Friday morning.

Officers responded to a robbery call shortly after midnight at the Cool Zone gas station, on the 11300 block of Emerald Street. Upon arrival they found two people in the parking lot suffering from gunshot wounds.

Both victims were transported to an area hospital where one of them died from their injuries.

Officers believe that the store clerk and a bystander got into an altercation inside the store and went outside. During that time the male suspect pulled out a gun and shot nothin victims.

The suspect then fled the scene with an unknown female on foot. 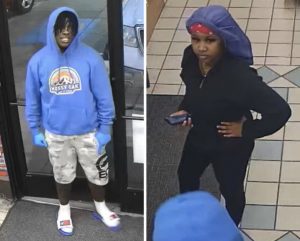 At this time the suspect still remains at large.

Anyone with information regarding this homicide is asked to contact police.