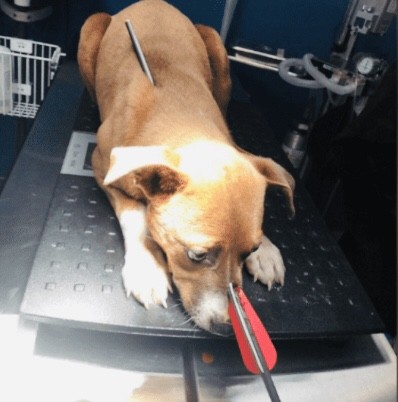 A puppy was shot in the head with a bow and arrow Tuesday night and authorities are searching for the shooter.

Five month old Loca was found shot in the face by her owners on their back porch in South Carolina.
Loca was taken to Paws and Claws Animal Clinic where she underwent surgery to have the arrow removed. Doctors say the puppy was very lucky that the arrow missed her brain and spine.

Loca is reportedly doing fine, recovering well and returned home to her family Wednesday.
Police are still searching for the shooter that shot Loca and is asking the public if they have any information regarding this case to notify Calhoun police.