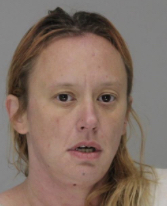 Dallas police officers arrested a female suspect in connection to the fatal North Dallas shooting Sunday.
Officers responded to a shooting call at the Oasis apartments located on the 9600 block of Forest Lane.
Upon arrival officers found the victim Timothy Alfred Nelson,54 unresponsive lying on the ground with a gunshot wound in front of his apartment.
During the investigation officers learned that Titia Green, 41 was responsible for the fatal shooting and she was arrested and charged with murder.
She is currently being held in Dallas County Jail with no bond.