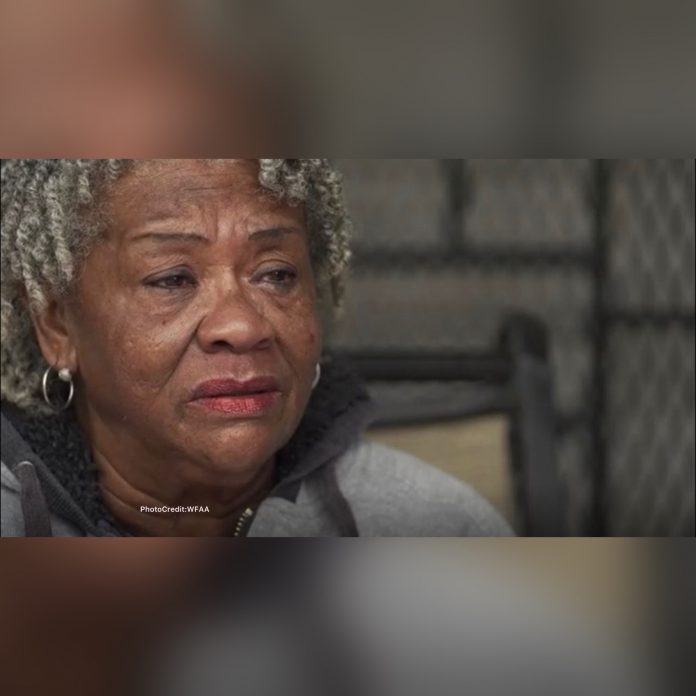 March 2020 was the worst month for a married Fort Worth couple that had been married for over 51 years and not because of the global pandemic of Covid-19.
Nelda and John Price were in complete shock when Fort Worth police plowed through their front door and put their hands in flex cuffs while SWAT ransacked their home as a part of a “no-knock” raid.
Both residents were black and were both 69 years old at the time.
Fort Worth PD initially told a judge they believed that the Price’s home was a drug house, and they would likely find methamphetamines and requested to have permission for a forced entry with no warning.
The “no-knock” warrant was signed by a judge on March 11, 2020.
The warrant that was approved reads that knocking “would be futile, dangerous, or otherwise inhibit the investigation.”
However, after the raid was performed, police came up empty handed. Police did not locate any money, guns, or drugs.
“When we stood up, the police were already coming to our front door,” Nelda Price told news reporters. “…it was just horrible.”
Nelda is still wanting answers from the Fort Worth Police Department and other city officials for reason why their home had been targeted over a year ago. She and her husband had owned their home for 20 years.
Nelda Price launched a lawsuit against the City of Fort Worth at the end of 2020 for excessive force, negligence, and violations of their rights.
But the most hurtful thing that bothers Nelda was that her husband John died weeks following the raid.
“He’s always taken care of us no matter what.” Nelda said.
According to her lawsuit, Nelda and her husband John had been placed in flex cuffs, which look like zip ties, and ordered them to stay on their front lawn.
“Fort Worth Police officers guarded the Prices as other Fort Worth officers proceeded to raid their home,” the lawsuit alleges.
“The never said one reason why they were there,” Nelda said.
“Several hours passed,” according to the lawsuit. “As time wore on, John Richard Price start to feel ill.”
Nelda said her husband suffered from problems with his blood pressure at his age.
“I asked them if they could get his medicine because I could tell that his blood pressure was going up, “Nelda told reporters.
“Despite numerous desperate pleas from Mrs. Price, Fort Worth Police ignored their requests and continued their unlawful search,” according to the lawsuit.
Price said throughout the whole ordeal she did not resist or act up.
“We didn’t get rude. We didn’t, you know, get out of line with police because of being Black, you know, don’t get tough,” Nelda said.
An ambulance was called sometime later, and John was treated at the scene. However, 53 days later John passed away.
Nelda believes that the stress of the “no-knock” raid contributed to the reason John died.
Fort Worth officials have yet to release video of the raid and have also declined to comment on the details of what happened, claiming the pending lawsuit prevents them from making any comments.
In state court, the City of Fort Worth have denied any wrongdoing in the allegations made by Nelda in her lawsuit. The city also battled to keep her from doing any interviews with city officials and gathering any evidence such as body camera footage to support her lawsuit.
A judge did recently rule in favor of The City of Fort Worth, denying Nelda from gathering any evidence she may need to move forward with her legal battle.
She now needs to turn to the federal courts to plead her case.
Kan Van Wey, the attorney for Nelda Price told news reporters that she does not understand why the city will not release any information in to why their home was targeted.
“These are standards of policing. Police get training. And there are standards of conduct. Clearly, that was not met in this case,” Van Wey added.
Van Wey says the city has revealed that the officers had “bad intel.”
“What we do know is that they obviously got it all wrong,” Van Wey said.
According to Van Wey, to get the green light for a “no-knock” warrant, the Fort Worth Police Department needs to provide the judge with information showing that the lives of officers would be in danger. She added that she does not understand what kind of intel would point to Nelda and John Price as being so dangerous.
“Unfortunately, John’s not here, but look at Nelda versus 15, 20, 30 Swat Officers,” Van Wey said. “Who was more in danger between the two of them?”
Questions in regard to the raid still haunts Price to this day.
“If they had just knocked on the door and said we need to do whatever it was they need to do, we would have had a problem,” Price said.
Nelda said that she would have voluntarily let police in, and she believes her 51- year marriage with her husband John would have continued on much longer.