Four suspects were arrested in connection to the Carrollton Bank of America robbery and shooting.

Carrollton Police responded to multiple reports of gunshots outside of the Bank of America on Josey Lane and Beltline Road around 12 p.m. Thursday.

According to police, two guards in an armored truck who were transporting money from the ATM were robbed by armed suspects dressed in hoodies. At some point during the robbery, it escalated into a shooting and dozens of rounds were fired off.

One of the guards, who got shot in the arm, was transported to Medical City Plano for treatment of non-life-threatening injuries.

Following the incident, authorities sent out a BOLO (be on the lookout) for the suspects and their vehicle. At around 2:45 p.m. a Smith County Constable located a vehicle that matched the description of the suspects’ traveling on I-20 near Tyler.

A traffic stop was initiated and four suspects that were in the vehicle were all arrested without further incident.

Charges against the suspects are still pending. They will be transported from Smith County Jail back to Carrollton to face charges. 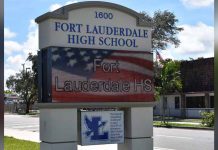