When Darren James arrived home earlier this month, his wife was holding up her phone displaying their bank account information. They had $50 billion in their account. This made them the 25th-richest people in the world. However, it would only be for four days. 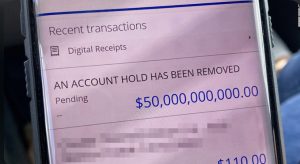 “We knew it wasn’t ours. We didn’t earn it, so we couldn’t do anything with it. We couldn’t spend it-that would be theft,” said James who is former law enforcement officer.

The couple called Chase Bank immediately after seeing the money. However, it stayed in their account until the next Tuesday.

James stated that this is not the first time he has heard of something like this happening. He is now worried about the security of his account.

Chase Bank says the incident with this account has been resolved.

“We had a technical glitch over a week ago affecting a limited number of accounts,” the bank stated.