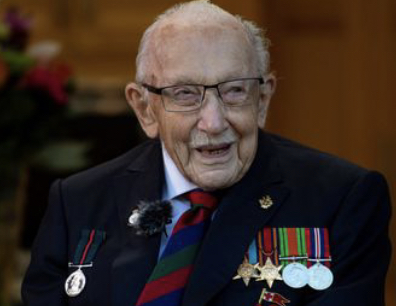 Tom Moore, the 100-year-old British World War II Vet who delighted the nation by attaining more than $40 million dollars toward the fight against COVID-19 last years, has passed away due to complications from the coronavirus.
The family announced the news via Twitter, sharing a picture of him during a walk in a happy moment… ready to tackle his next adventure.
“The last years of our father’s life was nothing short of remarkable. He was rejuvenated and experienced things he’d only ever dreamed of,” the family released in a statement. “Whilst he’d been in so many hearts for just a short time, he was incredible father and grandfather, and he will stay alive in our hearts forever.”
Captain Tom had a goal of raising 1,000 pounds for Britain’s National Heath Service. He was going to do this by walking 100 laps in his backyard. As he began his quest, he gained momentum has he became known in newspaper headlines and TV interviews. Little did he know, his quest was an overnight sensation and caught the minds of millions stuck at home during the first wave of the pandemic. Donations started pouring in like rain from across Britain and as far as away as the United States and Japan, raising nearly 33 million pounds which equates to nearly $40 million dollars.
From a timespan of three weeks this past April, fans were hailed with daily videos of Captain Tom, though bowed from age, he tiredly pushed his walker in the garden. But it was his great heart and bubbly attitude during these darkest moments that inspired people to look beyond their troubles due to this terrible pandemic.
“Please always remember, tomorrow will be a good day,” Moore said in an interview during one of his walks, saying those words became his trademark.
When Captain Tom completed his 100th lap on April 16, he was greeted by a lined path of the Military Honor Guard. He continued the celebration well into his birthday the next few days after. Two World War II fighter jets flew overhead in tribute. Captain Tom, with a plaid-colored blanket over his shoulder, did a big fist pump as they roared past overhead.
While having a backyard barbeque in early April, Captain Tom’s family challenged him to walk the entire length of their driveway. Which was measured to be around 25 meters in length. So, he took on the bet, and after making it to the end of the driveway, his family encouraged him to keep going, offering 1 pound per lap throwing a number out of 100 laps by his 100th birthday.
Things upsurged from there.
Captain Tom had even received praise form Prime Minister Boris Johnson, and even Prince Harry himself. He had been embraced by the public and those in his community. He even received upwards of 6,000 gifts and 140,000 birthday cards at the village post office.
He had been made honorary member of the England Cricket Club, had a train named after him, and was even recognized with the Freedom of the City of London award.
He dedicated his life story, “Tomorrow Will Be a Good Day,” to “all those who served on the front lines of any battle – be it military, psychological or medical.”
In the end, Captain Tom motivated people to look after one another, and he showed gratitude for the country he inspired at the same time inspiring him.