A man who is said to have fatally shot a 9-month-old baby was attacked in court on Thursday. This was just prior to him being arraigned.

Camera footage from inside of the Merced County Superior Court, in California, depicts Daevon Motshwane, 18, in handcuffs and sitting in a chair. Then, another man, wearing an orange jumpsuit and in handcuffs, too, came from behind him and attacked him. He hit him in the head with an elbow.

The man in the orange jumpsuit, James Clay McRae, had first been charged with first-degree murder.

Officers swiftly got ahold of McRae, and people had to leave out of the courtroom briefly.

Also in the courtroom during the struggle were relatives of the victim, Darius King Grisby, 9 months old.

“Every time you go in there someone gonna come at you and beat you up every time…be ready for what’s coming for you boy. Like a lot is going to come your way, and you’re gonna be hurt. Like damaged real bad,” said Daruis’s mother, Monica Ayala.

Daruis had been shot and killed as his mother and her friend walked him down the street in a stroller.

Officers say that Motshwane meant to shoot the man who had been walking with Darius and his mother, on November 9. 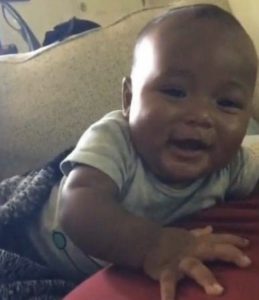 On November 17, authorities located Motshwane about 85 miles away from the crime scene, and he was apprehended.

Authorities also arrested a juvenile who they say had been driving the car.

Motshwane has been charged with one count of first-degree murder and two counts of attempted murder which could result in life in prison.

Motshwane will now be arraigned on December 8.