Mesquite police are searching for a woman they say robbed and assaulted an elderly woman in a grocery store parking lot Tuesday afternoon.

The incident took place on the 500 block of N. Galloway Ave Tuesday afternoon when the 80 year old female victim was robbed and then dragged by the suspects vehicle.
The victim was transported to a nearby hospital where she suffered a broken nose and bruising.

Video surveillance in the area captured the black 2005-2010 year model Chrysler 300 and it may be missing a front license plate.
If you have any information regarding this case call CRIMESTOPPERS 214-373-8477. 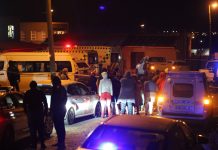 22 Teenagers Discovered Deceased Inside Of Nightclub