A Milwaukee man is facing charges after 113 animals were found inside his home over the weekend.

Larry McAdoo was charged with two counts of mistreatment of animals and 10 counts of negligently providing improper animal shelter.

Authorities were called to a residence near 9th and Hadley on December 9 for an animal cruelty compliant. Upon their arrival officer smelled a strong odor of animal feces and urine. 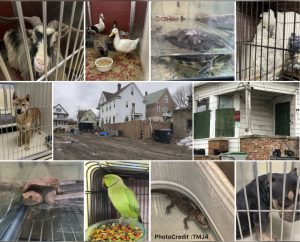 A French bulldog, a chicken and a raccoon had to be euthanized and a few animals were already dead inside the home.

McAdoo was arrested and once in custody he admitted to not maintaining the animals. He claimed that he started out helping take the animals in but after awhile it just got out of control.

He remains in jail on a $3000 bond and is expected to appear back in court on December 30.