A newly released report from the U.S Army regarding the controversial death of Denisha Montgomery leaves family members with even more questions.

Private First Class Montgomery, a 27-year-old mother of 3, was stationed in Wiesbaden, Germany when she was found dead in her barracks on August 9th. 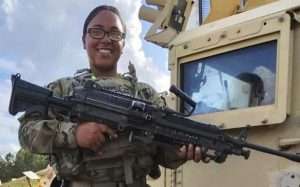 According to family members, on July 19 Montgomery video called them and asked them to record the call.

In the recorded footage, which shows her covered in bruises and open wounds, she says, “I just want to come home. Look what they did to me.”

Montgomery explained to her family that she was assaulted by military police after they went out drinking.

In an initial ruling, Montgomery’s death was declared a suicide, however, family and friends knew that was not the truth.

Now, the U.S Army has released an updated casualty report in which Montgomery’s “category of death” is marked as “pending.” The circumstances of her death also states “determination pending.”

According to the military, it was German authorities who ruled the case a suicide.

A final conclusion with full details will be provided by the Criminal Investigation Department.