A Mississippi mother is upset and asking for answers after her 5 year old child received a ‘Monkey Award’ earlier this month from school.

The mother, Shemekia Ellis, says her pre kindergarten son was given a monkey award for entertaining the class. Although he was given other awards she claimed this one stuck out the most. 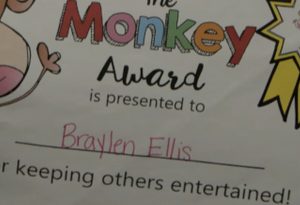 The mother says she went up to Batesville Elementary to meet with the principal but the situation hasn’t been resolved.

School officials claim the teacher did not know that comparing a black student to a monkey was derogatory or insulting.

Ellis told the news station the school’s principal explained to her that Braylen got the award during an animal-themed ceremony. It’s not clear if other children in the class received the same award.

She also stated that teacher gave it to the pre-K student for “his energy,” however the mother said the certificate was for “entertainment.”

Ellis says she wants an apology and that the school and teacher should be held accountable for their actions.

At this time the The South Panola School District has yet to comment or release a statement about the incident.