A man in San Bernandino County, California, is facing allegations of terrorizing women while sporting a Pennywise mask.

On Wednesday, authorities received a call from a bank, close to 5:15 p.m. A woman, 54, told officers that a man who was wearing a white clown mask, similar to Pennywise from the horror novel and film “It,” had robbed her, close to the bank’s ATM. 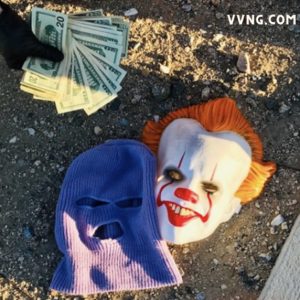 Then, a man matching the description was found walking near the location. He was apprehended and later identified as 22-year-old Joel Hernandez.

Detectives found that Hernandez was also being sought for a different offense. A little before robbing the woman, Hernandez is said to have sexually assaulted and groped a 50-year-old woman in the parking lot of a grocery store. That woman later identified Hernandez as the man who assaulted her.

Hernandez is now being held in custody on a $200,000 bond for robbery and sexual battery.

Authorities are looking for other possible victims.