A bag containing $300k was stolen off a Brink’s truck after the bag of money was placed on the vehicle’s bumper and the driver was distracted.

The armored truck was parked outside of a Chase bank in Sunset Park, New York, around 1 p.m. Friday. The driver, who was supposed to drop off $300,000 to the bank, set the bag of money on the vehicle’s bumper momentarily.

According to police, two men witnessed what happened and approached the driver, engaging in conversation by asking him for directions. With the driver distracted, a third man snuck from behind and grabbed the bag of money before fleeing on foot.

Following the successful snatch of the money, the other two men fled the scene as well. All three remain at large. 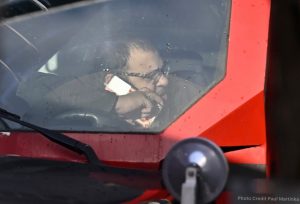 The driver could be seen on the phone in his truck after being robbed.

Investigators say they believe the heist was not an inside job, just an opportunity taken by criminals.